Back in April I attended the excellent NETI meeting at UT Austin. Here’s the group photo: 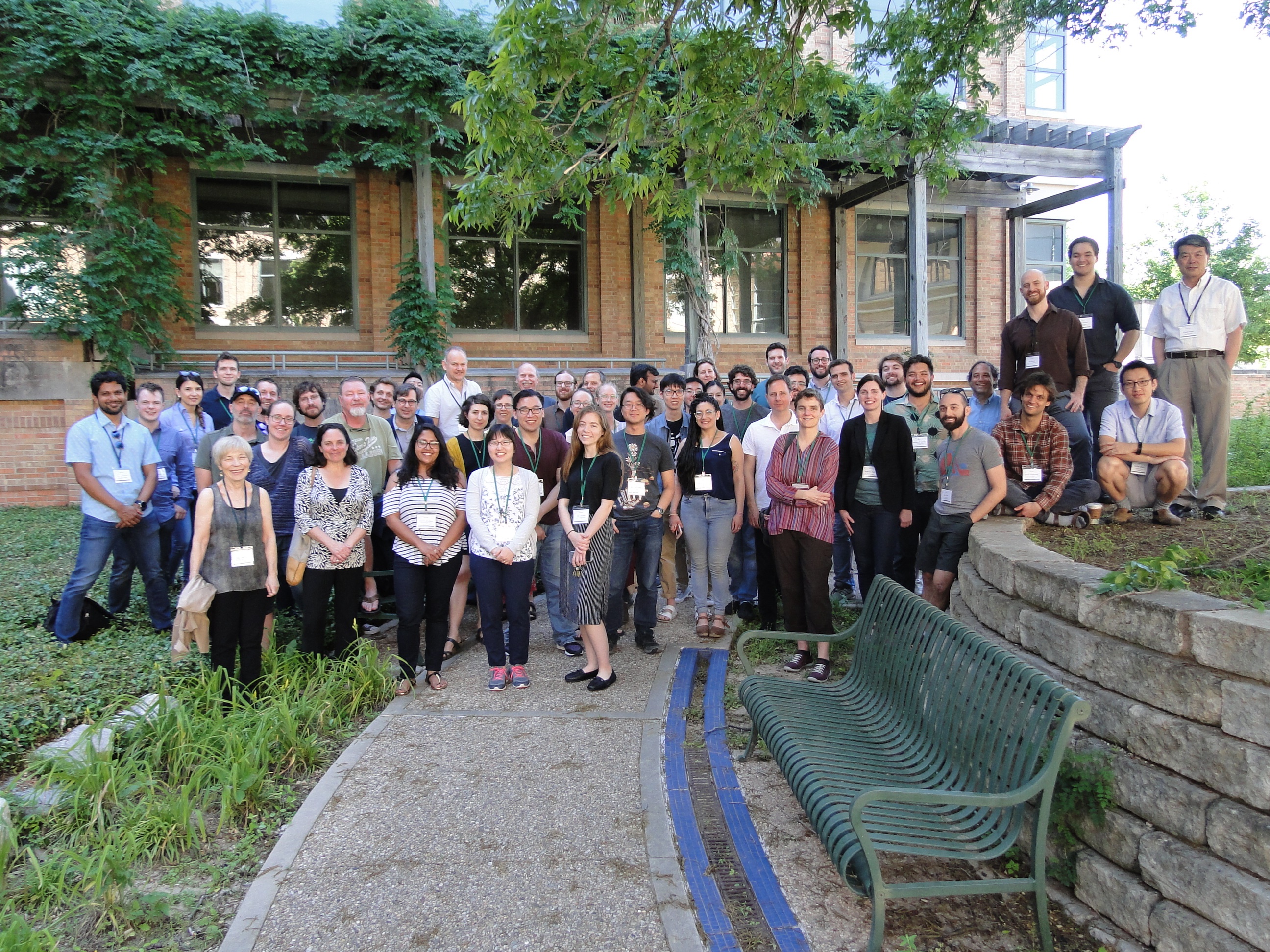 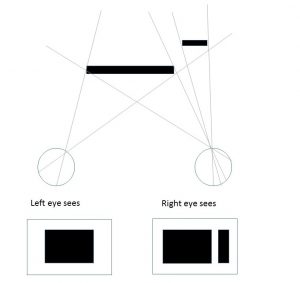 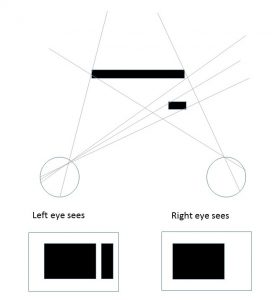 Lab members Chris Kaspiris-Rousellis, from Greece, and Maydel Fernandez Alonso, from Cuba, are Early Stage Researchers on the European Training Network on Full-Parallax Imaging. Here, they explain their projects.

Find videos from all 15 ESRS here.

Sid, Maydel, Chris and I had an excellent time at the VSS meeting last month. Thanks to Ignacio for this snap of my talk on “When invisible noise obscures the signal: the consequences of nonlinearity in motion detection.” Sid gave a great talk on his work “Modeling response variability in disparity-selective cells.” 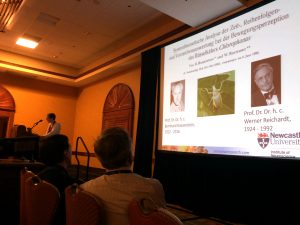 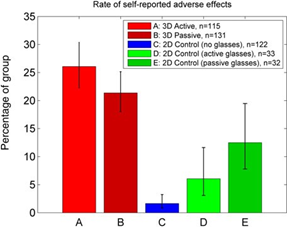 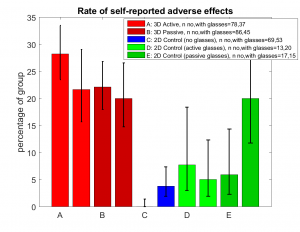 I was happy to see this blog post from software developer Scott Logic, featuring Readlab alumnus Paul Hands. We wish you all the best in your new career, Paul, and it’s great to see you using your maths, computing and science training out in the world beyond academia.

This question comes up occasionally and I was just recently asked a similar question by email, so I thought it would be a good idea to do a blog post that everyone can see. Although there’s a great article on this here: http://mentalfloss.com/uk/biology/30542/your-eyes-see-everything-upside-down

First off, the image of the world projected onto our retina is upside. This is just a consequence of geometry. This image from the Wikipedia article on pinhole cameras shows this nicely:

Our eye is more sophisticated than a pinhole camera — it has a lens so it can collect light over the whole of our pupil and bring it to a focus on our retina — but that isn’t important here. The retinal image is still upside-down. So why don’t we see the world upside-down?

One way of answering that is to point out that our eyes don’t, actually, “see” anything at all. Seeing happens in the brain. All your brain needs to know is the relationship between which photoreceptors are receiving the light, and where the object is in the world. We’ve learnt that if we want to touch an object whose image appears at the bottom of our eye, we usually have to raise our hands up (in the direction of our shoulders) while extending them, not move them down (towards our feet). So long as we know the correct mapping, it doesn’t actually matter where on the eye the information is.

My former colleague Dr Catherine O’Hanlon, now at Aberystwyth, and I have just published a paper on an interesting effect we found in small children. The roots of this study go back 7 years to when my son was two and I was reading a picture book with him. I was asking him to find various colours, and I noticed that he struggled to find colours that were in the background of the picture, like “blue” in a seascape or “yellow” in a beach scene. Apparently, he automatically ignored the background and attended only to colours in foreground objects. I thought that was an interesting phenomenon, and asked my developmental-psychology colleague Catherine if this was well known in small children. She said it hadn’t been reported, so we went ahead and tested more children to see if it was just my offspring or more widespread. It turns out that many two- and three-year-olds show this effect. They seem to assume that you must be talking about objects, even when you ask them something neutral like “Can you find green?”.
We think this bias helps young children acquire language.

Here are links to the press release and the paper itself.

Yes, it’s acronym time — by ETN-FPI TS2, I mean the second Training School of the European Training Network on Full-Parallax Imaging, which was held at the University of Valencia in September 2016. Chris Kaspiris-Rousellis and I attended, and had a marvellous time learning about optics. I had done some geometrical and wave optics as part of my undergraduate physics degree, but it was great to get back to it, refresh my memory and learn more. The course was brilliantly run by Manuel Martinez and Genaro Saavedra, and consisted of morning lectures followed by afternoon practical sessions in the laboratory. 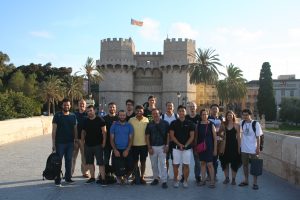 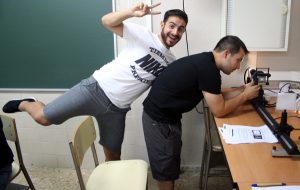 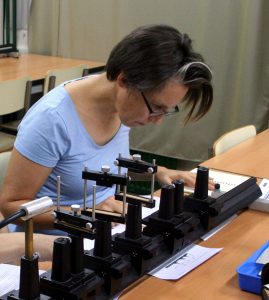 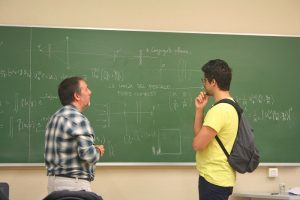 In our lab, we run experiments on praying mantis vision. We show the insects videos on a computer (mainly boring stimuli like bars moving, or little black dots which are meant to simulate a bug) and video how they move, via a webcam. The webcam stores a short video clip for each trial. The webcam is positioned so it films only the mantis, not the computer screen. At the moment the experimenter then manually codes the video, making a simple judgment like “mantis looked left”, “mantis moved right”, “mantis did not move” etc.
Here are some example video clips of mantids responding to different visual stimuli.
We would love to be able to analyse these automatically, e.g. to get parameters such as “angle through which mantis head turns” or “number of strikes”.
As you can see, this is pretty challenging. There are big variations from experiment to experiment, and smaller variations from session to session even within the same experiment. The overall lighting, the position of the mantis, what else is in shot, etc etc, all vary.