This section of my website arose indirectly from my participation in the MP-scientist pairing scheme. I was asking my MP, Dave Anderson, what he was interested in getting out of his visit to my lab, in order to plan a schedule for him. He said he was mainly interested in understanding what a scientist would do all day — “I mean, not trying to be funny, but for all I know you just sit around waiting for a bright idea.” So I thought people might find it interesting if I tried to give an idea of how I actually spend my time. Here are a few examples of things I might do during a day. I wouldn’t actually get anything like all of these done in a single day! — some of them would take several hours just on their own. 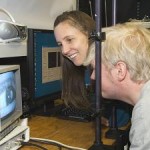 Working with an eyetracker – my PHD student Graeme Phillipson & me 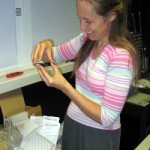 Setting up a mirror stereoscope 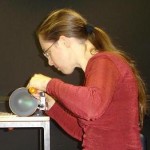