In 2007 I was awarded a New Investigator Award from the MRC to investigate vertical disparity. As part of this I ordered a new projector system from Virtalis. This uses two F20 sx+ single-chip DLP projectors from Projection Design. These projectors are relatively unusual amongst single-chip DP projectors in that they are genlocked to the video input, meaning that the two projectors can be synchronised — essential for my purposes. I hope they will prove superior to my Matrix 2500 LCD projectors in several ways:

I have also moved to a new lab, which together with the new projectors is allowing me a much longer throw distance, some 3.4m. I now have a very large screen which is fixed to the walls, dividing the room in two (~2.7m wide x 2.0m high). This screen is made of Filmscreen 150 from Stewart, which was recommended to me by Virtalis as having both good polarisation-preserving properties, and also much less hot-spotting than my perspex Screen-Tech screen. I was concerned that a fabric screen would oscillate too much in the air currents, introducing misalignments between the images. However, this does not seem to be a major problem (aided of course by the large throw distance and short separation between the projectors, meaning that their two beams are striking the screen at approximately the same angle).

The display computer is located near the projectors. To said in developing code, the signal to each projector is split using a DVI splitter box, and copied to a flatscreen monitor on the desk. This means that we can develop code with the projectors turned off, using one monitor for the Matlab command window and editor, and the other two monitors to display the left and right images. We can also control the display computer from the observer’s side of the screen using a wireless keyboard and Gyration mouse, which is handy. All code is run off the network rather than the local hard disk, and similarly the results are written to the network. This means that when I am piloting a project, I can sit on the observer’s side of the screen, using my laptop to modify the stimulus code and view my data over the network. I then just use the wireless keyboard to set the modified code running on the display computer. This means I don’t have to walk back and forth between the two sides of the screen. This is all shown in the diagram below: 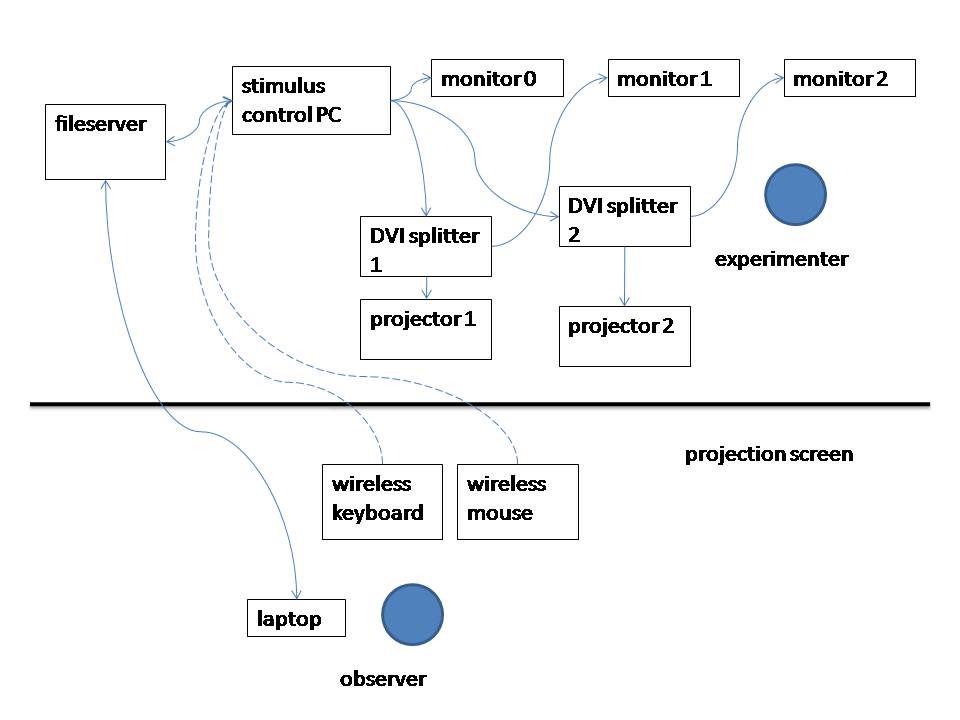 The projectors can be controlled remotely with a single handset, which can talk to either projector individually or both together. Certain simple operations, e.g. turning the projectors on and off or blanking their display, can be done over the web. More detailed information for lab members is available here.

The behaviour of this system is documented in more detail below: