Here are some notes on getting high refresh rates under Windows and Linux. For the experiments where I cared about fast timing, I usually also cared about contrast resolution, so this mainly assumes I was also using the DATAPixx. I don’t think that’s important though.

Persuading the PC to run at 160Hz in Linux

For one experiment, I wanted to use the high refresh rate (160Hz) allowed by my CRT monitor at low spatial resolution (800×600). Initially, couldn’t get this in Windows 7 (but see below). In Linux, I managed to get 160Hz going when the CRT was connected directly to the graphics card (see my notes on that), but I had problems when the same monitor was connected via the DATAPixx, as in the diagram above. I was using this /etc/X11/xorg.conf file, with modelines requesting 800×600@160Hz for the DATAPixx.

When I looked at the display using the nvidia-settings utility, everything looked OK: 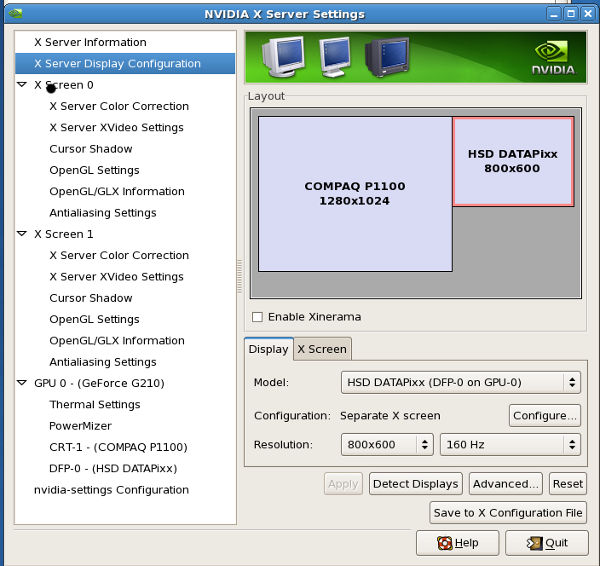 But it wasn’t. Really, the graphics card was ignoring my requested mode, because it believed the DATAPixx was a Digital Flat Panel which was only capable of displaying 1280×1024@85Hz: 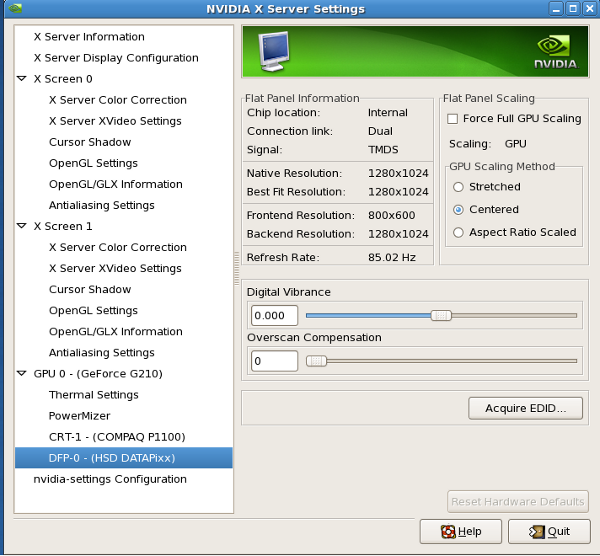 Sure enough, when I measured the refresh rate with a photodiode, it was 85Hz – not 160Hz. I tried various ways round this, e.g. setting “useEDID = 0” in the xorg.conf file in the hope I could stop the system reading the DATAPixx’s inbuilt EDID and instead force it to use the modes I handwrote into the xorg.conf file. That didn’t work. I contacted VPixx and very quickly they had solved the problem for me. Using their dpxutil utility, I was able to rewrite the DATAPixx’s own EDID file with the resolutions I wanted. To do this, I boot up in Windows, run dpxutil.exe, and enter the command “edid”. This asks you to enter two modes; for example I entered “800 600 160” and “1024 768 145”, both of which are supported by my Compaq P1210 monitor. Then I turned the DATAPixx off and on again, and booted to Linux. Now, things look OK: 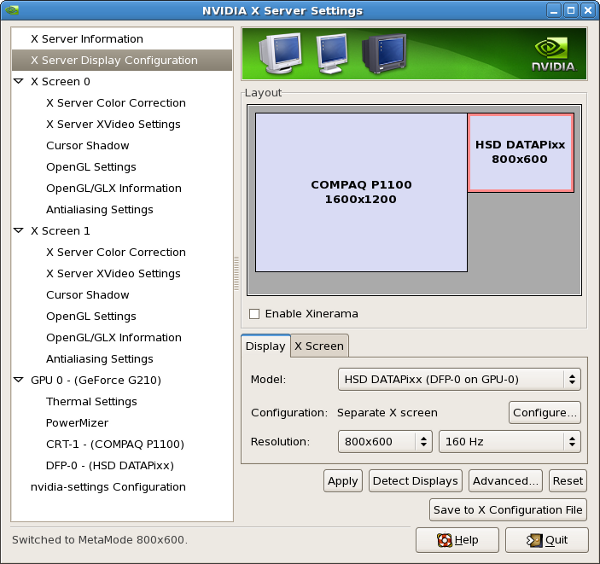 but this time they really are OK: 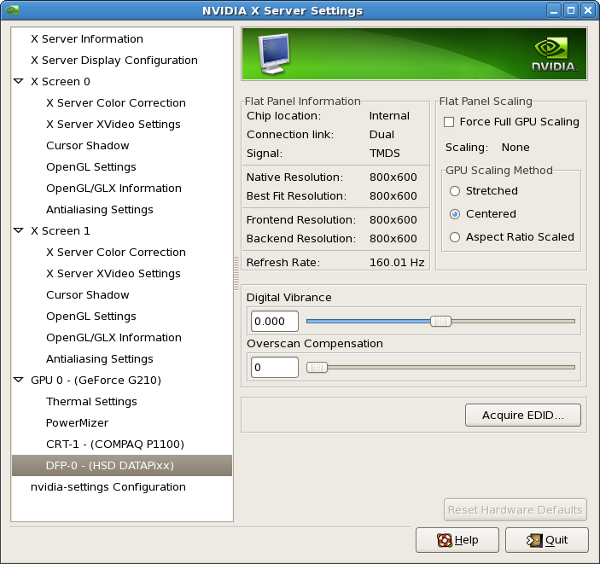 Persuading the PC to run at 160Hz in Windows 7

Since then, I’ve found that you can get 160Hz in Windows 7 very easily. I was using an NVidia Quadro 680 graphics card and a Mitsubishi Diamond Pro 4065u driven via the DATAPixx. Opened up the NVidia controller, and it has an option “Add custom mode”. I simply added 800 x 600 @ 160Hz, hit “Apply” and it all worked. Easy as that. Will run my drifting Gabor stimulus dropping about 20 frames out of 30,000. And certainly beats the agony that is Linux.

The pictures below are pretty much a step-by-step guide. Click on them for a full-size version. 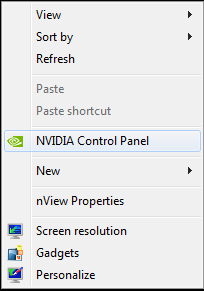 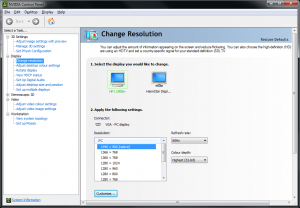 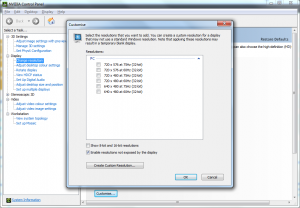 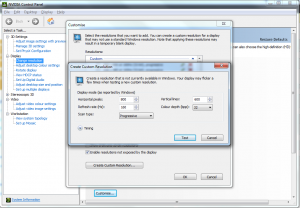 Running at 160Hz without dropping frames

Of course, a 160Hz refresh rate brings its own problems. With my NVidia GeForce G210, running at 800×600@160Hz, the graphics card could run simple stimuli OK. E.g., testing some PTB demo functions: ProceduralGaborDemo reports no dropped frames and an average framerate of 159.99Hz. DriftDemo6 reports 2 dropped frames out of 9601. SpriteDemo, ExpandingRingsDemo, DotDemo report no dropped frames; ContrastModulatedNoiseTheElegantStyleDemo reports 26/1020 dropped frames. Reducing the resolution doesn’t seem to help: at 640×480@160Hz, ContrastModulatedNoiseTheElegantStyleDemo reports 30/844 dropped frames. My actual stimuli do result in quite a lot of dropped frames. So, basically, the graphics card can do 800×600@160Hz provided the stimulus is simple enough, but gets left behind with more complex stimuli. Here are some hints, mainly from Mario Kleiner, on how to help: 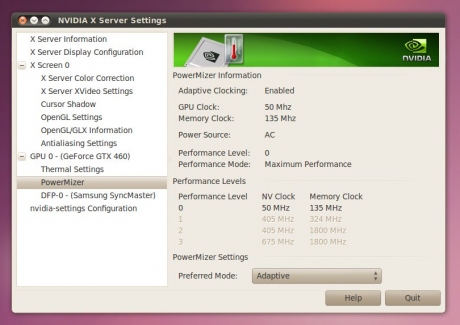 Peter April drew my attention to another cool feature of the DATAPixx. I used the dpxutil to update the EDID with two modes: the 800×600@160Hz I actually wanted, and another at 800×1250@80Hz. (Peter says choose a number 50 pixels or so larger than twice the height you want.) Turned the DATAPixx off and on again, used the gtf utility to get an appropriate modeline, and updated the /etc/X11/xorg.conf file. 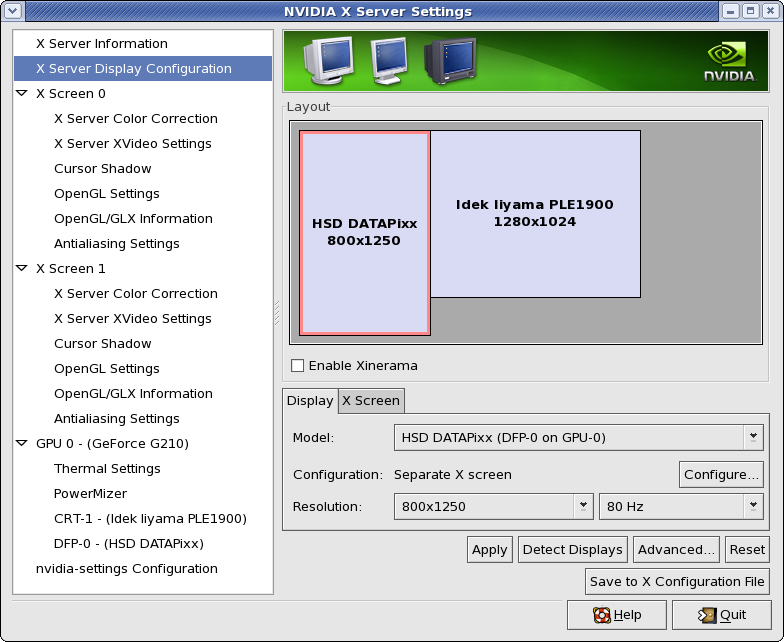 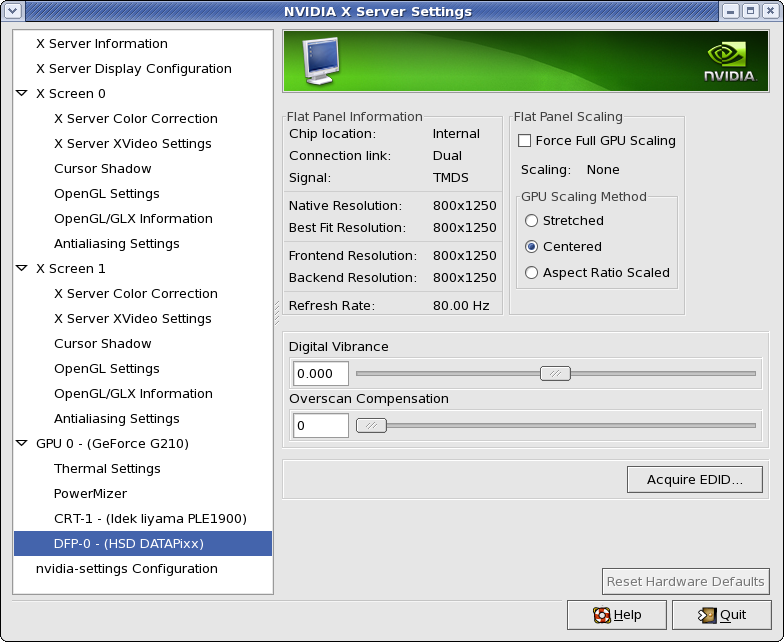 There was a problem with this initial attempt, because it resulted in a total vertical number of lines which was odd, so that successive frames differed by 1 in the number of lines (i.e. 655 and 655 lines in alternate frames). This is apparently taken by CRTs as a signal to do interlacing, so both my frames were (I think) displayed at once, on alternate lines.

Now, let’s test it out. I open a window using PsychImaging as described above, so 0=black and 1=white. I fill the whole screen with white and do:

with YOFFSET=654. This results in two gray rectangles which are black where they overlap. The DATAPixx is displaying the two frames in alternation, so the black rectangles appear grey where they are being alternated with the white screen. Thus note that the above code fragment, at 80Hz in verticalStereo mode, is NOT equivalent to