I’ve just come across the following by Lord Rayleigh, him of the scattering, quoted in The Handbook of Perception and Human Performance:

“In science, by a fiction as remarkable as any to be found in law, what has once been published, even though it be in the Russian language, is spoken of as known, and it is too often forgotten that the rediscovery in the library may be a more difficult and uncertain process than the first discovery in the laboratory.”

Maybe slightly less true today than in 1884, thanks to Google, but still more true than I’d like!

Finally got round to buying a Google Cardboard viewer and trying it out on my HTC One phone. Ooof. That is painful. I don’t know if it’s me or my phone (the magnetic clicker doesn’t work with HTC One, that much I know) but the effect is nauseating. It keeps jumping and skipping even when I don’t move my head. I had to take it off after about two minutes. I hope for the sake of the future of VR that other people aren’t having the same experience as me…

I recently watched “The Machine”, an enjoyable sci-fi flick about a secret defence project to construct an artificially intelligent android who will be the ultimate super-soldier. Naturally, they design their robot killer in the form of a shapely young woman who spends much of the movie in a state of undress. What surprised me was that, in the opening scenes, they manage to totally mess up the well-known Sally-Anne “doll” test for theory of mind.

In the words of Wikipedia, the “the key question [is] the Belief Question: ‘Where will Sally look for her marble?'”. In the movie, the scientist asks “Where should Sally look for her ball?” which makes a nonsense of the whole thing! I am surprised that no one picked up on this in the course of making the movie. Come on people, it’s not rocket science.

I was just reflecting how awesome my four postdocs are, and thought that rather than keeping such thoughts to myself, I should write a blog post and show them some appreciation.
Ghaith, Vivek, Ronny, Kathleen (named in order of when they joined the lab!) are all awesome — so smart and independent. It’s a breeze being PI of this bunch! The only problem is that they do make me feel rather inadequate as I look back and realise how totally clueless I was at the corresponding points in my own career :). When I was recruiting the three postdocs for the M3 project, I remember shortlisting these three and telling colleagues “If they all accept, I really will have my dream team.” Well, they did, and later on Kathleen joined us for ASTEROID. I really am one lucky PI and all I can say is, I do realise the fact. 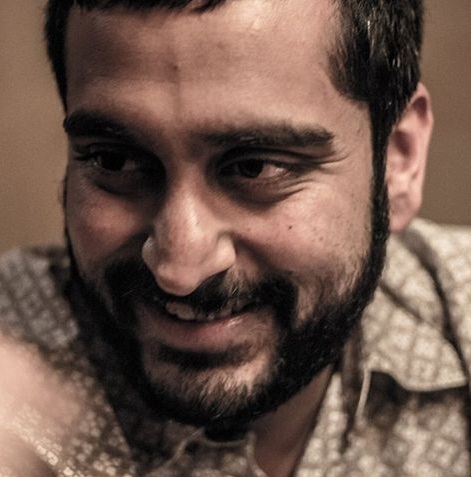 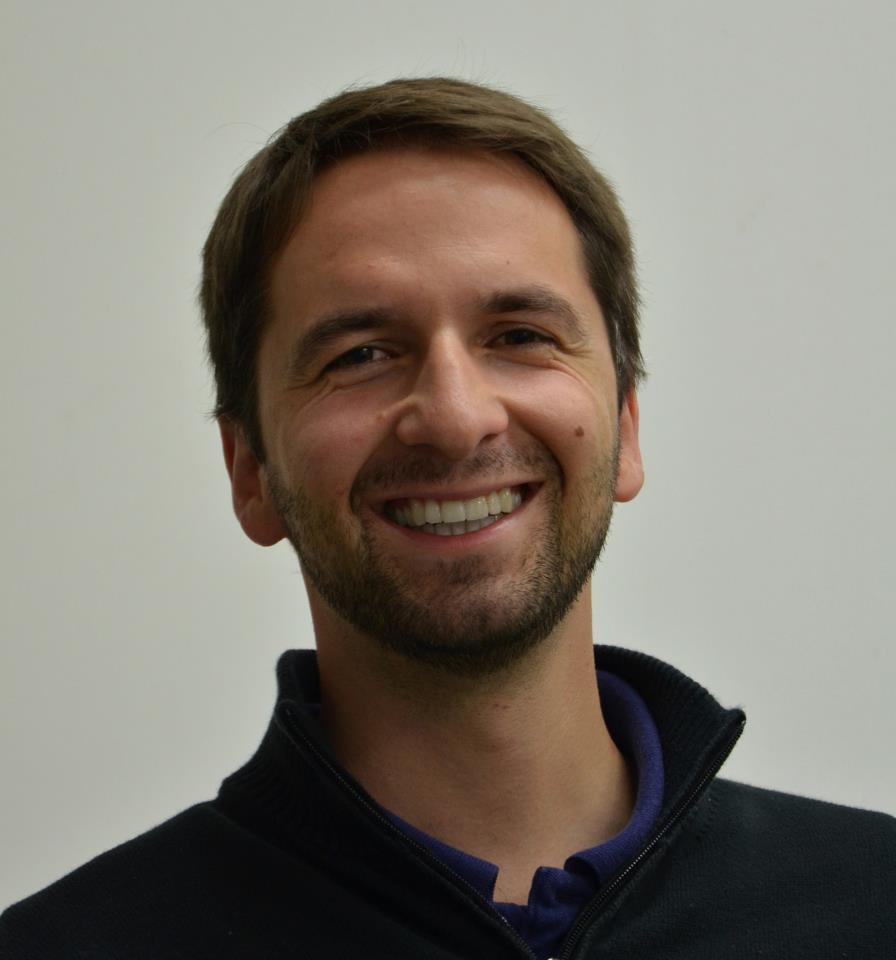 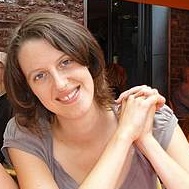 I thought it might be useful to point out a property of relative disparity. One way is as Andrew Parker does in his 2007 review: Relative disparity = (alpha-beta) in the diagram below. 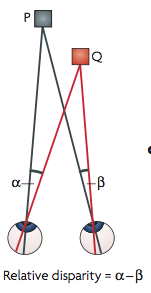 In the special case where P is the fixation point, then alpha and beta are the retinal coordinates of the left and right images of Q, and the difference (alpha-beta) is the absolute disparity of the point Q.

If P is not the fixation point, (alpha-beta) is not the absolute disparity of Q, but it is still the relative disparity between the points P and Q.

In one of our papers, we used a slightly different definition which is probably less intuitive but is a handy way of looking at it: 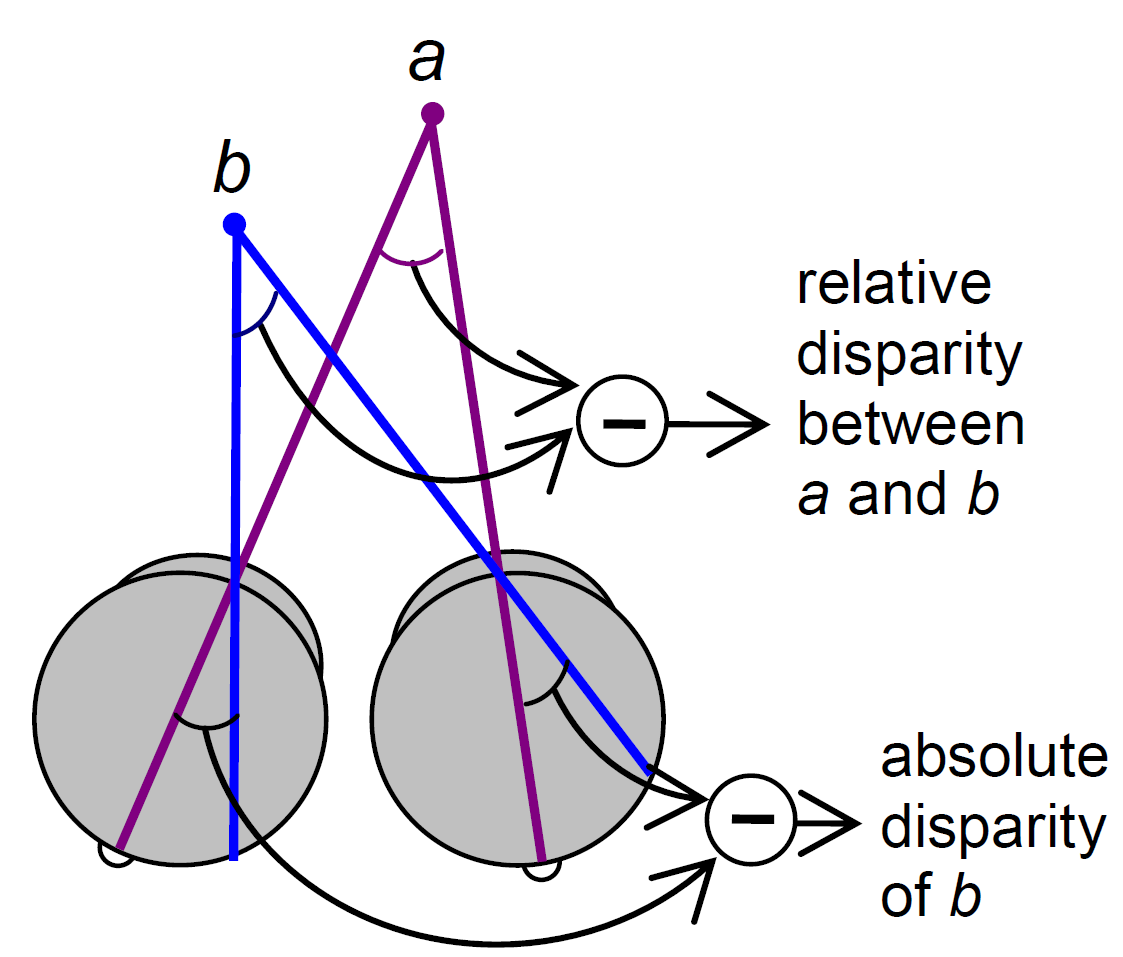 As the following diagram shows, these two definitions are actually the same: 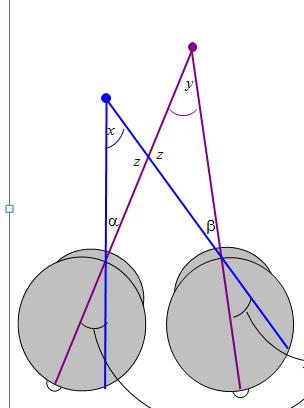