One of the questions I regularly get asked as a PhD student / research scientist is what it’s like going away on science business to conferences and the like. Well I thought I would share my recent experience with a conference in Florida, USA to hopefully answer the questions and let people see some of the highs (and lows) of conferences in general!

First things first, and it’s the question I get asked all the time about it: I did not pay personally for the flights, accommodation, conference attendance, or even food while I was there. If you were buying something non-essential (such as beer, or a trip to the gym) it comes out of your own pocket but if it’s something you need to ensure that you are at the conference and comfortable the university (so long as approved by your supervisor) will provide it.

The initial part of any conference is always rubbish: the travelling there, on your own. For me this time that meant a 1am alarm on Thursday morning, a taxi to the airport, a flight from Newcastle to Amsterdam, to Atlanta, to Tampa, which included a missed flight (through immigration controls) and about 26 hours without sleep. This is in my opinion the key worst bit of conferences away: Loneliness. This one wasn’t so bad because once we arrived I was staying at an apartment complex with many of my fellow lab mates and scientists, including Sid and Zoltan. We hired a car from the week (paid for) to ensure we could get to the walmart and back to the airport at the end of the week. It definitely worked out cheaper, but the driving on the wrong side of the car on the wrong side of the road in 3 lane traffic got some getting used to. 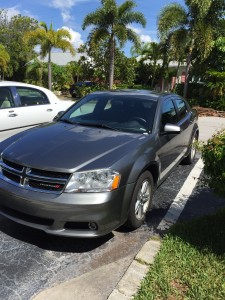 Upon arrival we pretty much had time for a quick tea at a local restaurant before bed. Up nice and early in the morning for the first day at the conference. Sid, Zoltan and myself arrived comfortably in time to register, which was a very well oiled machine for a conference of thousands of scientists. You always get a name badge so you can talk to anyone. You just have to hope your interests overlap. 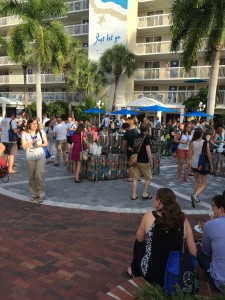 Now I imagine most of you are thinking ‘well yeah but hang about! You get to go to Florida, paid, for a week!?’. That is certainly an upside of VSS, glorious sunshine everyday. However the conference ran pretty much all day every day. So on no day did we get a ‘day off’ to just relax, or explore. That said at these things, particularly when there are literally hundreds and hundreds of different scientific talks, and thousands and thousands of scientific posters, you need to chop and choose which you go to, and make sure you don’t run out of steam. Our lab is fairly specialised, and because of this we all went to similar talks and posters, and in the sessions relevant to us we always had somebody giving a talk or presenting a poster. I won’t bore you with all the full details, but many of our lab presented, as well as other members of the institute, and we all did a smashing job (if I do say so myself!) Zoltan, Jenny and I had posters to present, while Sid (and also Ignacio, a long term collaborator of Jenny’s) had talks to give. 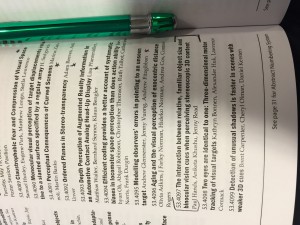 This sort of leads me onto the next bit that is very cool about being at a conference, even though it’s something small: having your name written down in the abstract book for all to see. You feel practically famous!

The talks themselves were all very interesting, and that wasn’t the only thing VSS put on for the scientists. As I’m sure some of you are aware there was a big hoohah about ‘the dress’ earlier in the year. Well the science behind it was explained by members of our institute (Anya, pictured below with Jenny) and some people wore the different coloured versions of ‘the dress’ including our own Jenny! This was at a general demonstration night, where all manner of optical illusions and tricks were shown and explained using visual science. I think this was the highlight for me, personally, as it also had a beach bbq with 2 free beers each! 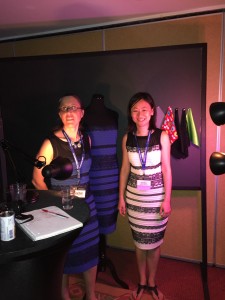 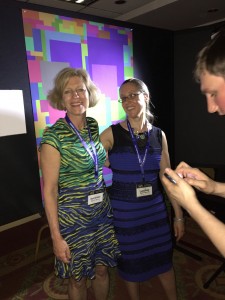 While I was out in Florida it wasn’t all just work work work. I got the chance to visit the local gym and have a train, as well as catch up with an old friend who had moved out here some months before, which was a lovely extra bonus. The fact you had to pick and choose what talks to go to to ensure you didn’t miss anything you were bothered about also meant you occasionally had a couple of hours free…Ample enough time to catch a bit of sun by the pool!

After that however it was time to go home, which meant another lonely flight back, and back to reality (where you have to submit a receipt for every purchase if you want the money back!).

As conferences go, VSS 2015 was a particular gem, due to location and the fact my fellow lab mates were there. Sometimes it can be a lot worse, with a lot of time spent in your hotel room on your own in the cold with nothing but a book to read to keep you entertained! But the whole conference thing is most definitely a perk!