Last week I spent two days in London attending the annual 3D creative summit (3DCS) at the British film institute (BFI). It’s a place where all of the big shots from the world of 3D production (such as Sky 3D, Pixar and other companies like the company that worked on The Hobbit: The Desolation of Smaug) come together and showcase their newest content and discuss just how they did what they did, and the decisions they made. In amongst this different 3D only companies, who provide rigs and technicians, were present, with their equipment, to show people a more in depth look at how different 3D works.

I was amazed by the different talks. Highlights for me were a pre-recorded interview with James Cameron (of Avatar fame) and also Sir David Attenborough. I was also impressed by the showcases from Sky 3D, as well as Pixar and Onsight productions (a 3D company which helps with many different productions throughout the year). 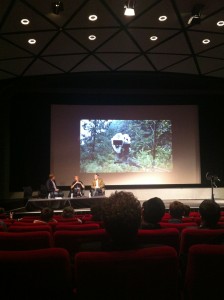 Here we see Onsight productions explain more of their 3D film about pandas. While filming the crew had to go through the same procedure as the staff and wear panda outfits (complete with urine smell) while in the enclosure. As you can see it led to quite an interesting image!

I spent a good hour talking to some of the staff at Onsight at their rig, learning a lot about the subtle differences in 3D production and camera terminology and the more lab based research world I come from.

However the thing I was most impressed by were the autostereo televisions. These are ‘glasses free’ 3D television. And they’re going to be a game changer, in my opinion. Brilliant 3D without the glasses just grabs you immediately. Immersive and entertaining and deals with many of the problems that current 3D displays have to deal with. At 3DCS 2013 they were talking about how it was coming and it would be the next big thing. Well here it is. And I can’t wait to see what happens next year (and when they get cheap enough I’ll definitely be buying one!) 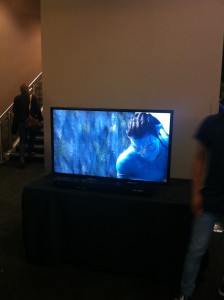 While blurry here, if you had two eyes and were watching the television the impression of 3D was truly captivating.

And the one and only Brian May was there. See, 3D can be cool too! 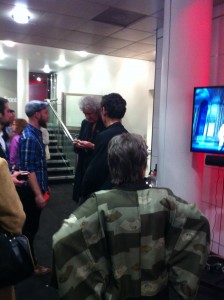