Many thanks for agreeing to score some mantid behaviour videos for us. The videos that you will be seeing all come from an experiment we did, which looked at whether praying mantids could detect small targets moving on a screen. It was a laboratory experiment, which allowed us to present small targets one at a time, and measure if the mantids responded to the prey. Each of the videos that you will watch is of a mantid looking at a target moving on a screen. What we would like you to do is to tell us whether or not you think the mantid detected the moving target or not. The possible scores are “Definitely Yes”, “Probably Yes”, “Probably No”, and “Definitely No”, so you can indicate how confident you are.

There are some classic behaviours to look out for, which indicate that a mantid has detected a prey:

Mantids may make other movements, but we only want to include those that appear to catch the sudden detection of a target. Therefore, we suggest that some types of movement are more likely to not indicate detection, including:

To help you better understand the behaviours we’re asking you to look for and score, we’d now ask you to look at some videos. These videos include the targets moving on the screen, but when you are scoring the experimental videos, these will no longer be visible and you will only score the mantid behaviour. So please spend some time looking at these videos in order to familiarise yourself with mantid behaviour.

Examples where mantids DO respond to the stimulus

In the first eight videos, you will see behaviours that suggest that the mantids have detected a target. In the first seven videos, you will see mantids rapidly moving their heads in response to the target. They might do this once or multiple times. Keep an eye on the mantids’ antennae – you will see them clearly moving closer together when they detect the target. Movement of one or more of the antennae like this suggests detection of the target, even if they don’t move their heads. The mantids may also move their bodies, with or without moving their heads. Some will strike at the prey – you’ll recognise this as they ‘twitch’ or ‘lunge’ their front legs, which they use to capture prey, at the screen. You would probably score these as “Definitely yes” – a clear response.

Here are two examples where you might be less confident. The following video has a nice example of how the mantis’s antennae can move when they detect prey:

In this example, the mantis also turns its head to track the stimulus. But even if you only see a distinctive antenna convergence like this, with no other head movement, please score it as a response (maybe a “probably yes”).

The last video (below) is the hardest. Here, the only sign that the prey has been detected is some small body movement, as the mantis leans forward slightly. You might score this one as “probably responded” as it’s unlikely you’d be confident without being able to see the stimulus.

Sometimes, mantids may show what is called a ‘startle response’ towards the prey. This involves them pulling back from the screen, sometimes raising their front legs slightly apart, like we might raise our hands if we were surprised by something. This is their natural response towards seeing something that they feel threatened by, and is a response that you should record as a target detection.

Examples where the mantis does not respond to the prey

In the following set of six videos, you’ll see mantids not responding to the prey. In the first four, you can see that the mantid doesn’t respond at all, so you would score these “Definitely no response”:

In the next video, although the mantid is moving, this is not scored as detecting the prey. This mantid is showing typical grooming behaviour, which involves ‘licking’ one or more of its legs:

Grooming behaviour is pretty clear, so you will probably be able to score videos like the one above as “definitely no response” to the stimulus.

In some videos, mantids may seem to ‘jiggle’ throughout, showing small movements throughout the video, that don’t seem to suddenly change in any way, and you can see that in the following video:

We don’t want to count these as a response to the stimulus. You might score these as “probably no response” as it’s difficult to be entirely sure.

We will now ask you to score the experimental videos from our mantids, masked so that you can’t see the part of the screen where the stimulus will move across it. You will get to see each in turn and ask to return one of four scores as to whether the mantid has detected the prey or not: Definitely Yes, Probably Yes, Probably No, and Definitely No. Of course, whilst in some cases it might be really easy to decide if the mantid has detected the prey or not, in others it might be more difficult, but we ask you to make a decision none-the-less.

Start up Matlab and type VideoCoder. You will get a small window which asks you to enter your “Coder ID”. Just use your first name, but please type it exactly the same every time you log in, as otherwise the program will think you are a different person.

Then, here is what you will see: 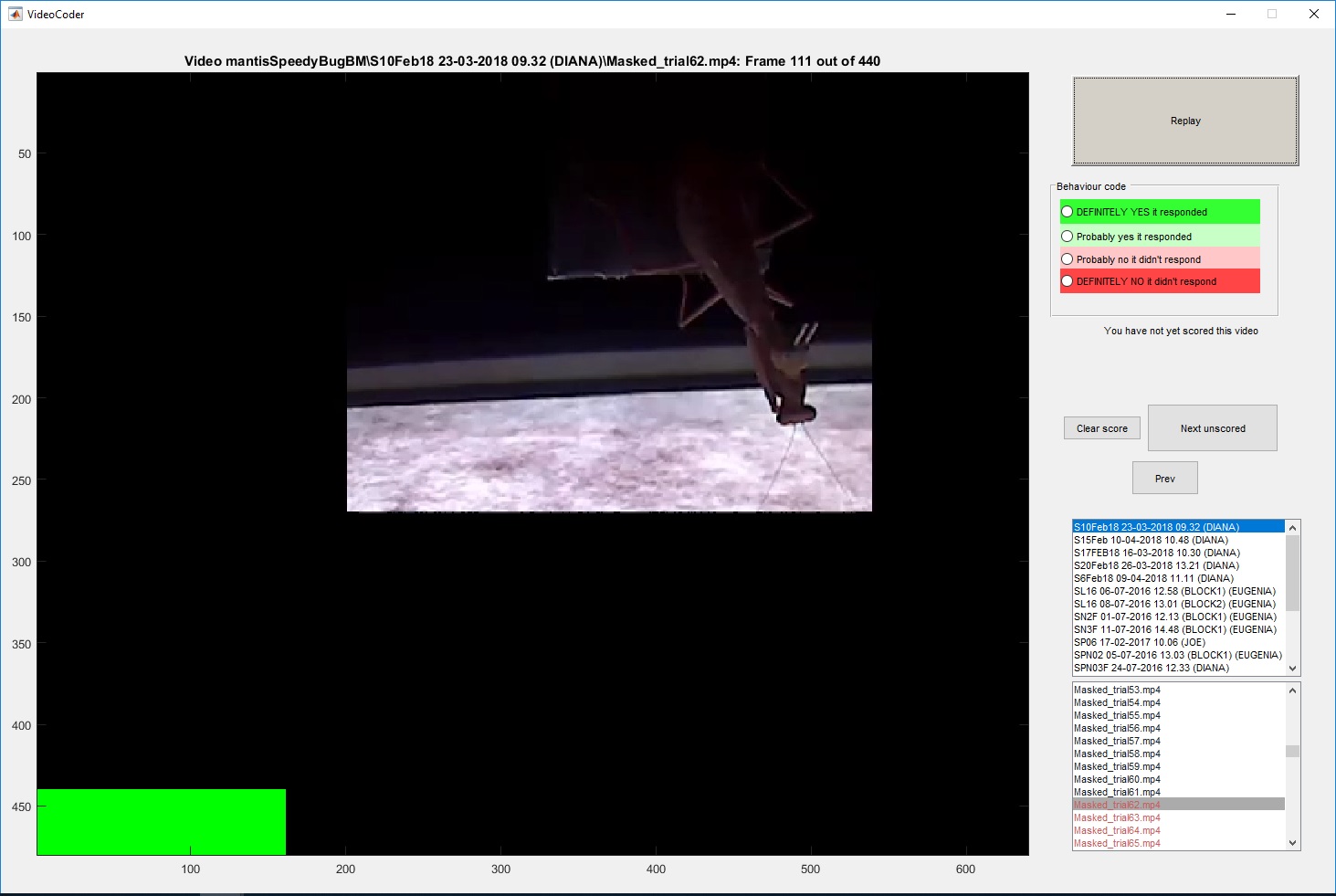 The program will automatically go to the next video which you haven’t yet scored. The video will play automatically; the green bar across the bottom shows progress. If you need to see it again to be sure about the coding, hit “replay”. You can also navigate between “sessions” and “videos” using the menus below, if you want to select a particular video. If you have already scored that video, your previous score will be shown. You can just click a new score to clear the old one and save the new one. If you realise you accidentally made a mistake, you can either just rescore that video immediately, or go back to it later in this way. Your scores are automatically saved as soon as you make them.

Warning! Due to my poor programming skills, the program can get confused if you try and go to another video while the first one is still playing. It ends up playing all videos one after the other, and then you aren’t sure which one you are scoring. To avoid this, please wait for one video to finish before going onto the next, even if you have already scored it (e.g. if the mantis clearly responds halfway through). If you do get into this state, you can always just close the program (click the X at the top right in the usual way) and start it up again if it gets confused.