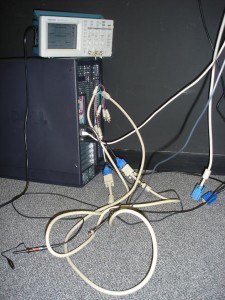 It’s essential that the images be displayed by the two projectors at the same time. Even differences of a few milliseconds can start to degrade stereo vision — this is the reason I did not want to use active stereo technology. Fortunately, the two video outputs from my NVidia card are exactly in synch. This is shown in the oscilloscope screen-shots below. To obtain these, I connected the VGA outputs from my NVidia card to a VGA-5BNC cable. These are the cream-coloured cables in the picture on the left; I bought them from Maplin’s. This ends in 5 BNC terminators, carrying the red, green and blue colors, and the horizontal and vertical refresh signals of the video signal. I connected the vertical-synch BNC cable (black, labelled V) from each output to one channel of an oscilloscope, as shown on the left. 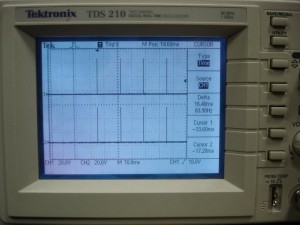 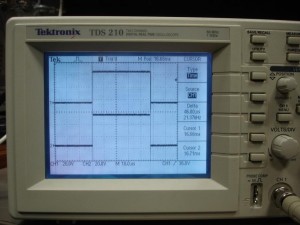 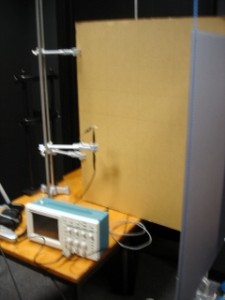 This could fail to happen if the projector display is not tightly locked to the vertical synch input. I gather this is the case on many DLP projectors, as they depend on the phase of the colour wheel, which is arbitrary. I’ve also read people saying they had problems with LCD projectors. My choice of the Christie Matrix 2500 projectors was to a large extent determined by Christie’s assurance that the projector output was synched to the video input. So, this was something I was keen to test once the projectors arrived in my lab.

I made both screens be black, except for a white square which appeared for 1 frame and then vanished for n frames. To begin with, I had the square appearing in only one projector; the other projector was black at all times. (Actually, I didn’t change the stimulus; I just set one projector at a time to “no show”). I wanted to check, first of all, that the left-hand square from projector #1 was not visible to the photodiode that was meant to be monitoring the image from projector #2. The results are shown in the next two pictures.

Here, one of the projectors was black at all times, and the other was flipping up a white square every 5 frames. With these LCD projectors, it’s interesting that even when they are notionally black, the light level still fluctuates at the 60Hz frame rate. However, it’s clear that the height of this “blackscreen” oscillation doesn’t increase on every 5th frame when the square is presented on the other side of the screen. So, I was convinced that I wasn’t going to be misled into thinking the images were synchronous due to cross-talk between the photodiodes. 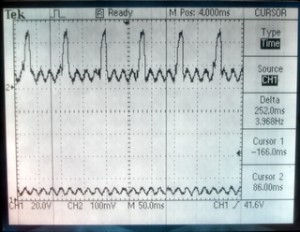 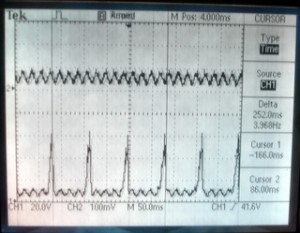 I then switched both projectors to ‘show’ mode, so that each of them was displaying a white square, for 1 frame every n frames, to its own photodiode. Here are some screenshots, for different n and time axes. 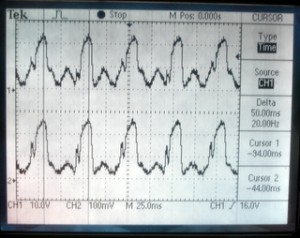 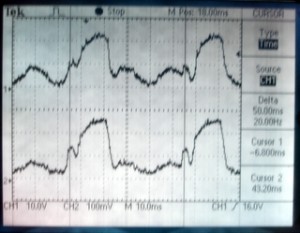 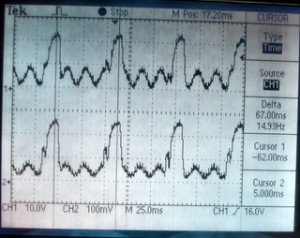 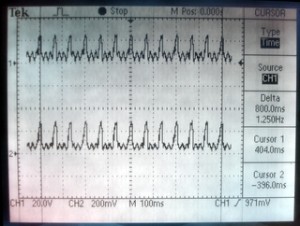 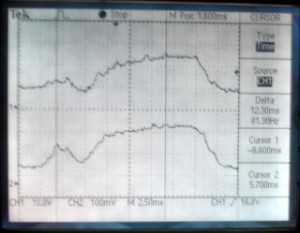 The first screenshot verifies that the screen refresh rate is indeed 60Hz as advertised — 12 cycles of n=4 frames last 800ms. The last two screenshots show that even quite small blips in the light output are pretty well synchronised. NB – here I’m obviously only looking at the temporal relationship between the projectors. I don’t know the relationship between the photodiodes’ output and the luminance falling on them, and notice that the outputs of the two diodes are completely different magnitudes, presumably reflecting the details of their positioning and perhaps the settings of the two probes, which I must admit I didn’t check. However, it seems clear that the light output of the two projectors is perfectly in synch, at least up to the poor temporal resolution of these LCD projectors.