Dec 05
Having decided to use passive stereo projection with linear polarisation, it was then important to choose a projection screen that preserves the polarisation of light falling on it. The companies I found which seemed to do something suitable are:

Having decided to go for a rear-projection system, I obtained samples of several different screen types from Screen-Tech and Stewart. I tried to carry out accurate measurements of the polarisation of light before and after it had passed through the screen. 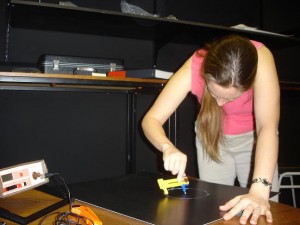 The light source I used for this calibration was a colleague’s old slide projector, propped up on a pile of books. In front on the black card, on a piece of optic breadboard, you can see a polariser, set in a rotating mount. 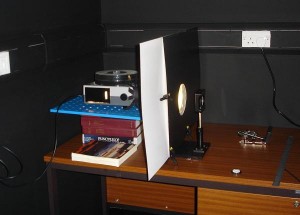 Here’s the set-up I used for calibrating screen samples. From left: light source, fixed-axis polariser, screen sample (surrounded by card, with just a circular hole cut in the card to view the screen through), variable-axis polariser (hidden by the card around it), photometer. All the black card is my attempt to reduce stray light, to ensure that all the light falling on the photometer has been through both polarisers and the screen. 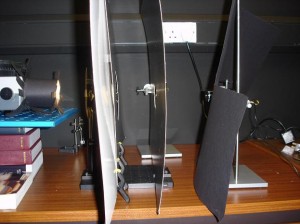 I realise this isn’t the most accurate set-up ever. Also, I used a colleague’s old photometer, which I am not confident that I had correctly calibrated, and I don’t know for sure that it takes accurate measurements with polarised light. So, for all these reasons these measurements are to be taken with a pinch of salt. Still, here they are.

I measured the amount of light recorded by the photometer when it had passed through two polarising filters, aligned so their transmission axes were parallel, and when their transmission axes were crossed. The second column reports the ratio of these two values (the extinction ratio). I took several values for each screen type, with different distances between the light source, filters and photometer, i.e. over several different light intensities. The values in column 2 are the geometric means of the different values I got for the ratios, while the third column gives you an idea of the range of ratios I got.

The fourth column is a bit meaningless. It gives the ratio of the photometer reading with the screen in between it and the light source, to the photometer reading with no screen. So, it reflects how much the screen diffuses the light as well as how opaque the screen is. Really you want a screen which lets all the light through and diffuses it in a wide range of angles, and this number isn’t helpful in assessing this. Oh well. It was easy to measure and it does give you some idea of how bright the image looked.

The different rows refer to the screen material in between the polarisers. In the first row, there was no screen, just air, so the number 2500 gives you an idea of the quality of my polarisers and of my experimental set-up. An ideal screen would not degrade polarisation, and so all the numbers would be equal to that in the first row. In practice, the screens severely degraded polarisation.

In this table, the “best” screen looks to be ST-Transparent. However, in fact this is not really ideal for stimulus presentation. To a large extent the light just goes straight through this screen without scattering, so you can almost see the projector spotlight behind the screen, and the illumination is uneven. It would be a dramatic screen for displaying an advert on, but not great for visual science.

I went for ST-Black (aka ST-Prof-DC) from Screen-Tech. All the Screen-Tech screens are rigid, available in either 3mm or 5mm thick. (These measurements were done on 3mm samples). The Stewart Filmscreen materials are flexible. I liked the idea of having a rigid screen, so I would not have to worry about small image distortions as the screen moved slightly due to air currents etc. This, combined with the good polarisation-preservation of ST-Black, made me chose that screen. Since image brightness is not critical for me, I would have chosen the 5mm-thick screen ideally, but I went for the 3mm because it was cheaper.

April 2007
As it turned out, this may have been a very lucky budget limitation. I’ve been told that although the Screen-Tech 3mm screens preserve polarisation well, the 5mm screens don’t at all! If so (I have not verified it), my desired 5mm screen would have had appalling cross-talk. I am very happy with the cross-talk with my 3mm ST-Prof-DC screen. The major problem is that it has quite bad hotspotting, i.e. the image is much brighter at the centre than at the edges of the screen. From a small screen sample, I hadn’t appreciated how severe this would be. This is because most of the light is re-emitted from the screen in a fairly narrow cone close to the angle of incidence. So, when you sit in the centre and view the corners of the screen, most of the light is sailing straight on into the corners of the lab and only a relatively small fraction is being sent out at such a small angle that it reaches your eyes, and hence the corners look dim. This is obviously exacerbated by the relatively small throw and viewing distance I am using (throw distance 1.5m from memory, and viewing distance 0.5-1m). This can be quantified by the gain curve which many screen manufacturers supply. As I understand it, this plots how much light gets re-emitted in each direction, for a single ray striking the back of the screen at normal incidence. To minimise hot-spotting, you want a flat gain curve — the ideal would be a Lambertian diffuser, which re-emits light equally in all directions throughout the hemisphere. ST-Prof-DC’s gain curve is relatively strongly peaked at the centre. To quantify hotspotting, gain curves can be summarised as a single number: the angle at which the re-emitted light has half the intensity it does at the centre. You want this to be as wide as possible. Even more manufacturers quote half-angles than show full gain curves. However, I’ve also been told that you have to treat these with caution, as some sites don’t understand what the term means, and quote the wrong number. I must say in discussions with various suppliers, it has certainly seemed to me that they are not on top of the concepts, so it is difficult to trust what they say.

So I don’t plan on using Screen-Tech for my next rig. At the moment, I am considering Stewart Filmscreen 150 as representing the best trade-off between polarisation preservation and flat gain curve.